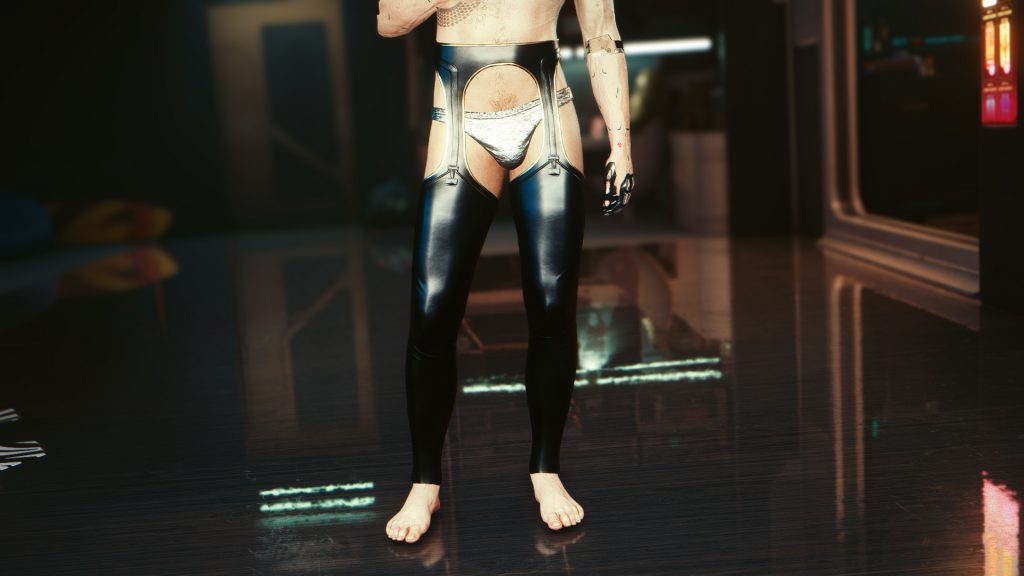 Converted from basegame assets but with themahat’s permission, since they originally did the female edit.

The original mesh has high heels baked into it, so these had to be heavily edited to fit male V. Limited testing but they seem to work okay. These are replacers for a vest, so mind the clipping with pants, of course. Suggested to be worn with nothing underneath, and they’ll use whatever underwear replacer you’re using. In the screenshots, I’m using Stevebg23‘s underwear replacers and both of the meshes were sculpted for these two replacers.

There’s a version to be used with this mod:
Pick your dick, basically: https://www.nexusmods.com/cyberpunk2077/mods/1479

Everything else will probably clip.

Choice of six colours. Don’t ask me about the missing “Holo” and “Transparent Red” variants, I couldn’t find them in the basegame files.

Bonus, it’s more or less compatible with the nomad harness from my Combat Stripper pack.

Find the underwear replacer here: https://www.nexusmods.com/cyberpunk2077/mods/1479 This version sits very close to the body mesh, it's meant to be worn with basically nothing underneath. INSTALL ONLY ONE FILE.