You know way back when when Dropbox was literally the only easy to use syncing/file sharing thing? And then everyone and their mom wanted to host our stuff in exchange for a nominal fee. I’ve reviewed SugarSync and Dropbox before and my opinion at the time was that SugarSync seemed to give me more flexibility and allowed me to share more than one folder.

I’m sure it still does. To be honest, I haven’t used the service in quite a while. After some time, having to sync an entire folder more or less became redundant for me. Most of the time, when I want something up on the cloud, it’s either to a) easily share it (like those pesky AssCreed posters) without consuming bandwidth or having to fire up Ye Olde FTP client or b) want to have access to it somewhere other than my home computer.

All I’ve really needed either Dropbox or SugarSync for quite a while has been to act as some sort of hotlinked dump space, where I can throw cool stock photos, types, a link here and there, a wallpaper I’ve made at home to use at work, and it goes on… without having to carry around a USB stick. 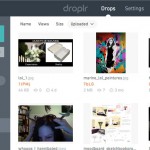 Enter Droplr. Got a file? Drag & drop it. A link? Same deal, click, drag whatever you want to throw online on the App’s icon and there you go. It doesn’t sync a folder or keep copies on multiple computers. It just hosts your files. They’ve added some additional nifty features now, like a sort of Skitch mini-app which allows you to annotate your images before uploading them to your drops. 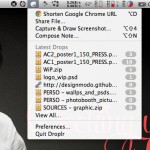 It’s nice, but mostly I like this service because it is lightning fast and pretty much available on every platform known to man (Mac, Windows, Linux, iOS, Android and Windows Phone) and you can easily share the URLs with everyone using their lovely little interface: 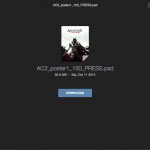 The only downside is that it’s a paid subscription service, and it’s not particularly cheap. The “Lite” version starts at 4.99$ (USD) a month and limits your upload file size to 25mb. The pro version, at 9.99$, allows you to upload files up to 1gb (though I’ve managed to dump 1.5gb files before. It seems a little arbitrary, but 2gb definitely doesn’t fly) and also lets you setup your own custom domain to access your drops. And both subscription tiers keep your files forever (as long as the account is active, I suppose) and have no storage limit.

It is absurd how often I use this little app.