I couldn’t resist; there are so many lovely hi-res images out there of both of our favorite assassins, it was simply too easy to mock up two gi-normous posters featuring Altaïr and Ezio. These aren’t printed yet, and I’ll post an update to show you what they look like in my, ahem, boudoir, which is to say, the spare room on the second floor of my house where I spend most of my weeknights writing.

Update: They are printed, and lovely and much bigger than I’d anticipated. Standing up, I reach just a little over the line between the green and white wall painting. So they’re huge. But oh so lovely and dark and rogue-ish. Mrr. Also, I only have one measly little window in my boudoir and when it gets dark (as it so often does in winter now…) all I can see are the hoods and vague menacing faces of my fave assassins; they’re actually a little scary in the dark. 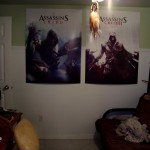 They are 36 inches wide and 48 inches high, and I managed to output them both at 150dpi without anything getting too grainy. I’m betting the large format inkjet printing will add enough texture and grain to offset any stray jpeg compression from the original images. 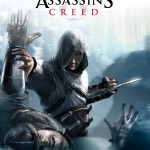 Altaïr gets a blue-ish poster, in keeping with the original game’s colour scheme. I modified the image somewhat; if you can find the original out there, you’ll see that I tweaked the character’s hood to better fit the angle of his face. The original just looked freaking weird. I also added some depth and width to his chest, because I can. :P 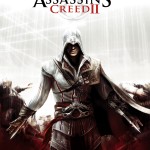 Ezio gets a lovely, pretty much unaltered image in red, which I used in part to tweak the Altaïr image so they would look more similar. Redid both logos in vector, because I simply couldn’t find them in a big enough resolution. Both files are pretty big (around 100 mb each), even flattened and rasterized.

Update: There have been quite a few requests for the large .psd files for these two. Seeing as how I’m so cool and all, I’ll be sharing these files directly here instead of asking you to send me an email. The only thing I ask you guys is to please send me piccies of the posters on your wall so I can add them here.
EDIT October 2014: Well, these things have been down for a while, since Apple closed down iDisk. Have some Droplr links instead. (We’ll talk about what Droplr is in a bit, I promise.)
Here’s AC1’s Altaïr (.psd file)
Here’s AC2’s Ezio (.psd file)

Watch out though, they are both around 100mb each, so it might take a while, depending on your connection speed. Have fun!

Brought to you by the awful, awful lack of decent Assassin’s Creed posters out there. Ubisoft is having a contest and giving away one with Ezio and the AC2 logo, but I couldn’t find -anywhere- where I could fork over some dough and get one of my own. Even Ubi’s own online shop carries nothing of the sort. Well. Screw that, and please don’t sue me; I’m making no money from these posters.